Earlier this year I looked at my older projects and eventually ended up rewriting an old story. I’m a lot happier with where that story is now that it’s been a cleaned up a bit, but digging through my projects did present a fact: I have a lot of unfinished projects.

There’s a lot of reasons for that. Most of it comes down to Shiny New Project Syndrome. It’s not that the ideas behind my stories aren’t any good, it’s just that a new idea is more appealing. Some of the stories are ones I just got stuck on and never came back to try and untangle the knot.

It’s frustrating because reading back over those old pieces while trying to decide on what I wanted to tackle for September, I’m reminded that these are good ideas. The writing may not be fantastic, but the idea behind it has merit. Part of that does come from the fact I’ve taken quite a bit of time away from some of these stories.

Regardless of what made me stop writing in them, they’re still there. Some of them did end up being mashed together and creating new stories and ideas, which are happily awaiting my next pass of editing. The majority of them however, are in need of revisiting entirely.

Which is what I’ve decided to work on for the remainder of the year. I set a goal earlier this year to have two projects published and with Seventh releasing in a serial format here on the blog, I can say I’ve accomplished that. But with only a few months left in the year, it’d be nice to set myself up to see what I can really do next year.

One of the first things I need to do is make a list of which unfinished projects need a complete revamp, and which ones merely need a finished draft.

I’m curious. What’s made you leave a project incomplete? Will you ever go back to that project?

In full honest confession, I actually didn’t know what a zero draft was until a couple of years ago when a writer friend mentioned she was about twenty-thousand words into one. I asked her what a zero draft was, and the answer I got surprised me: It’s the earliest draft of your story, in which there is no order.

It’s fairly well established at this point that I’m a pantser. I write based on whatever inspiration I have on hand. Up until I’d heard about a zero draft, I figured drafts that meandered, made no sense and generally had gaping holes were rough drafts.

Dependent on your particular process this might still hold true. Your rough draft is for you and no one else. A zero draft however, is often where you throw things in for the story before you write a proper draft. In other words, rather than looking anything like a first draft, it might just be a conglomeration of notes–such as ‘Come up with Witty Banter. Will needs to sound smart.’ or perhaps just a few rough ideas of dialogue. There might be a random character that pops up and then vanishes until two chapters before the end.

More or less, zero drafts are unstructured pieces of writing. This might mean a free writing exercise that takes up dozens of pages. Alternately, it’s just a collection of scenes to help you explore what you want to write. There’s really only one rule:

More specifically, write uninterrupted. If you get hung up on trying to come up with clever dialogue, then leave a note. If you don’t know what the next scene would be, skip to the one you do know. You can leave a note for what you know should happen next, or you can just hop from one scene to the next and back.

Do not edit. Don’t rewrite anything. Don’t even use the backspace or delete key. Just keep writing.

Give yourself permission to make the worst piece of writing ever. Title that document as your Worst Version Ever. Leave ridiculous notes in the middle of sentences. Ignore basic formatting or even start a new line every sentence. Whatever it takes to just get the ideas down.

On Sunday I wrote the last words for my current project. Or rather, I wrote the last words for the rough draft. I know myself better than to dive straight into editing and will be taking a little time off from Hero Stones to focus on other projects (just don’t ask me what yet, there’s a small mountain of ‘other projects’ endlessly awaiting my attention). While I’m happy to have finished, there’s also a mix of other feelings to go with it.

In part, I’m relieved. I’ve fought with this one for the better part of a year, including the original sections which I wrote back in July. Normally I can write a draft quickly, and it’s the editing that slows me down. That and the bout of burn out I dealt with when I was already so close to finishing definitely added up to some relief.

There’s also a strange sense of disappointment. That’s caused by two parts. One, being that I’m very much a pantser/discovery style writer. Although this was more a rewrite and re-fleshing of the original idea, I found numerous little ideas while writing which is my favorite part. The second part of that disappointment is that yes, I have finished and the flow I’d found while working on it now needs to be transferred to another idea (which is always easier said than done).

Along with all of that though, there’s a lot of excitement. With the rough draft done, I get to work on something else for a while. That might be writing an entirely new idea, or editing an old one. Eventually I’ll also have to come back around to edit Hero Stones, to make it better and stronger.

Although I’m finished with one part, there are still numerous steps ahead of me, and they’re all going to have their own mixed bag of emotions to go with them.

One of the most satisfying things about writing is putting two little words down. 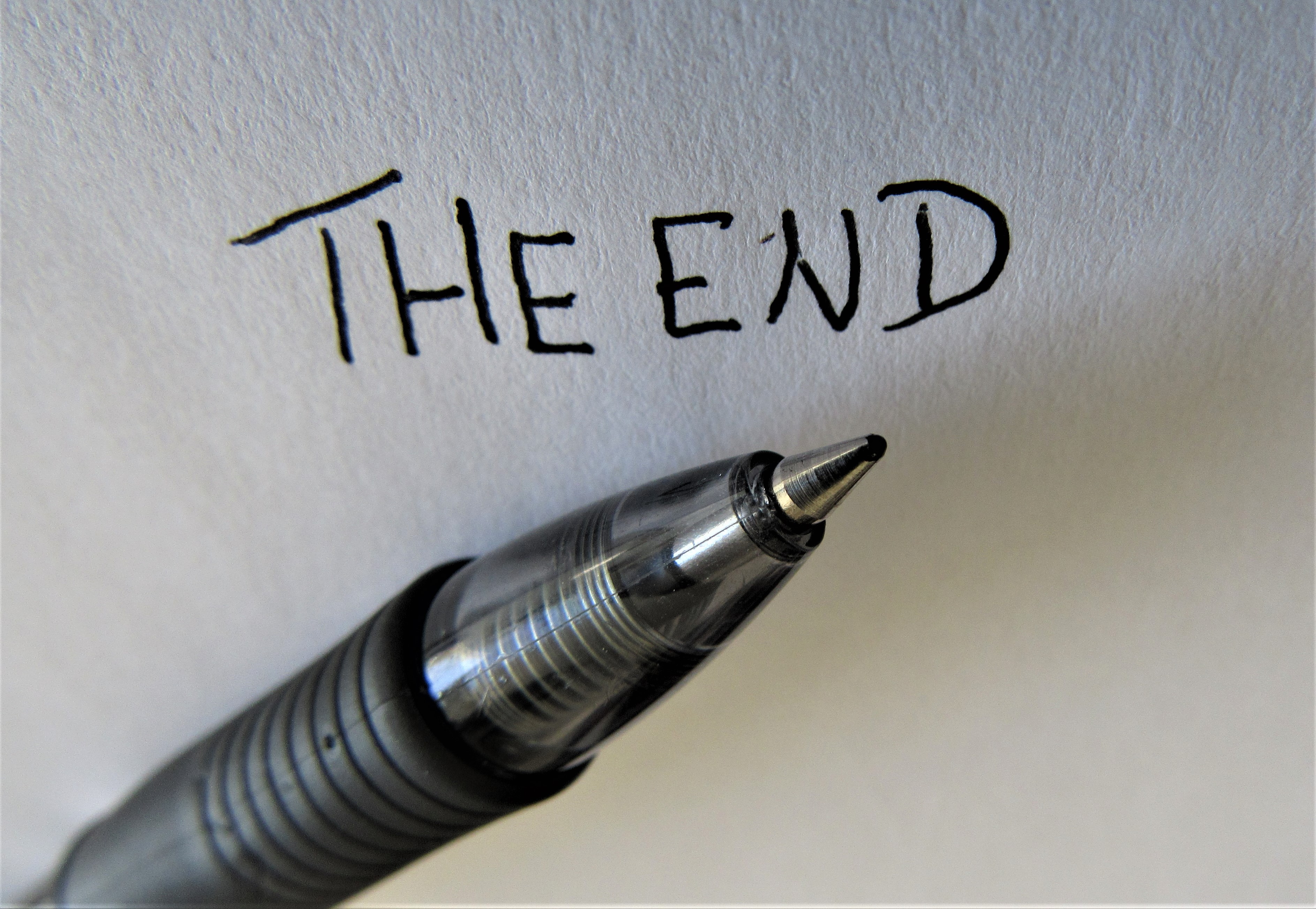 Those two words signify that you’ve done it. You’ve successfully done something that takes a lot of time, persistence and thought. Congratulations, you have finished your first draft.

And there’s probably the question of ‘Now What’ in the back of your mind. What are you supposed to do now that you’ve finished this thing?

Before you do anything else, put it somewhere safe. Make back-ups, just in case. First drafts are amazing things and you absolutely deserve to celebrate completing one.

They are however, only the first draft. There’s still an entire process of revision ahead of you. Sometimes you need time to celebrate that you’ve finished it, and to give yourself a little time to let the elation fade. Other times, you just need to decide what sort of path you want to follow for it. Will you try your hand at traditional or self-publishing? Perhaps you’d rather not face that toil and instead just want to print off a couple of copies for friends and family to enjoy.

Regardless of where you choose to take it, you’ve taken a huge step forward. The next step is revision.

Every writer has a slightly different style. This shows up in just about every stage of the writing process, and most especially, when figuring out where to start on telling a story. Everyone has a first draft, but first drafts can vary wildly.